July 20, 2020 Writer: Alex Look, Editor: Ben Clossey
In 2017, blockchain was one of the hottest search-words around, as people wanted to familiarize themselves with this emerging technology. These initial searches helped build a public interest in the ever evolving and expanding technology and eventually led to its wide-spread notoriety. The emergence of blockchain led to the creation of new jobs and opportunities that attracted a massive amount of applicants and candidates, and it was up to the Human Resources departments to place these candidates into certain roles. It is these Human Resources departments that will not only change how blockchain functions in the present, but in the future as well. Human Resources (also known as HR) is an integral part of knowing how to find the right applicant for the growing number of blockchain jobs, and with many relevant industries starting to incorporate blockchain into their business, there are more opportunities to get involved in the world of blockchain than ever before.

Explore blockchain careers through this interactive session led by Blockchain veteran Peter Borovykh, as he takes you on a blockchain job and career journey. See the data, statistics, and much more in this hands-on session about career opportunities and trends in the blockchain space for 2020 and beyond.

The increase in blockchain related jobs

As the growth in blockchain careers increases, the demand for blockchain developers is also growing. 2017 saw many companies taking interest in blockchain and as the demand for blockchain grew, the positions to oversee it did as well. The past three years have given time for continued curiosity and the opportunity for people to join new and cutting-edge technology. A Glassdoor report showed initial increases from the positive impact that the public's searches had on the blockchain industry, as the report observed a 300% increase in blockchain related jobs over the course of one year.
“Using Glassdoor’s database of millions of job openings, we found 1,775 blockchain-related job openings in the U.S. in August 2018, a 300 percent increase over the same period last year. As of August 2018, we found 1,775 unique blockchain-related job openings in the United States. By comparison, at this time last year, there were only 446 similar job listings, representing a 300 percent year-over-year increase.”-Glassdoor report on job increases.
A follow-up report done by Glassdoor helps prove how much of an impact blockchain will have on job creation in the span of a year.
“LinkedIn, the total number of vacancies related to blockchain and cryptocurrency hasn’t decreased since December 2018, but has instead increased. In total, as of the end of July 2019, companies have posted 16,668 offers, which is 2% more than last year. The number of U.S. companies that hire blockchain specialists has grown even more. The U.S. remains the unchallenged leader in the number of such vacancies, and it is also breaking last year’s records in 2019. According to the job search website Glassdoor, as of late July, U.S. firms posted 2,907 job offerings, which is up 40% from 2018. Indeed experts confirm the increased number of blockchain job proposals, referring to an almost twofold increase: ‘According to our data, the crypto and blockchain market is far from dead—in fact, it’s still rapidly growing. From February 2018 to February 2019, we saw the share of US job postings related to crypto, blockchain and Bitcoin grow 90%.’”-Cointelegraph
Despite the increase in blockchain-related jobs, the HR industry will largely remain an integral part of any industry, as Human Resources will always be a job that is needed by any industry no matter how much the position may evolve. There should be no worry of this position decreasing in importance because of blockchain. In fact, the impact that blockchain has will actually enhance the job and make the hiring process and payment of employees far easier in practice.

Take your career and expertise to a new level!

Confidence in the blockchain job market

“82% of respondents said that they are hiring staff with blockchain expertise or plan to do so within the next 12 months (verses 73% last year). That number jumps to 89% when considering only the same kinds of companies we confirmed last year.” -Deloitte Report

This Deloitte report from 2020 surveyed participants across the globe with experience in blockchain. The report found that confidence levels and the incorporation of blockchain into the workspace will continue to grow, meaning that more job opportunities will continually materialize at a positive rate over the next 12 months. As the job market becomes more competitive, it implies that blockchain related fields will require previous experience. 2017 sparked the public’s interest in blockchain and has given applicants time to come into job opportunities with experience and knowledge of the market. Human Resources will now have vast talent pools where they can see the development of projects, business techniques, and blockchain experience.

Companies that are hiring: 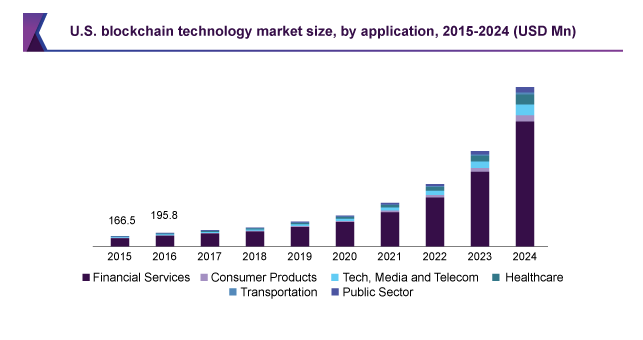 Looking at how blockchain has changed the world, it is currently making an impact on a variety of different industries. The global blockchain technology market size was valued at 1,590.9 million USD in 2018 and is expected to grow at a CAGR (Compound Annual Growth Rate) of 69.4% from 2019 to 2025. This upward progress can be seen in the above graph, as it shows a steady increase of blockchain usage by several different industries.

The Human Resources role in the present

The human resource department in blockchain has a limited number of jobs for hire. As jobs are filled and blockchain become more readily available, the positions will further evolve, setting a new standard for what an HR position will be seen as and what an HR job will require from applicants.

"I think [blockchain is] developing," Wester said. "There's still much we don't know about just how it's going to develop. Honestly, that's OK. The disruptive potential of blockchain is that it will completely change the way in which enterprise software is developed and distributed. A little uncertainty is to be expected."- IDC Research Director James Wester

Due to blockchain’s ability to fill all the new opening positions in businesses, Human Resources itself will see a change. For example, the HR department is given the role of overlooking applicant’s resumes, provided this role means being able to identify whether resumes are falsified. However, blockchain technology is able to detect falsified information content on a resume in a more consistent and methodical way than the average person. In 2017, Recruit Technologies and ascribe created a blockchain system to make resume authentication automated, thus meaning that blockchain could be used to authenticate whether or not a resume was truthful.

The future plans of a Human Resources role in blockchain

The future of the human resource role is beginning to be changed due to blockchain itself. Blockchain could be used to modernize hiring by enabling HR professionals to quickly verify the credentials provided by job candidates, existing employees, and companies. Furthermore, predictions have been made that blockchain can prevent third-party companies from providing inaccurate data about candidates. Being able to falsify records or accomplishments on a job application will be virtually impossible if the blockchain is used to fact-check a resumé.

ChronoBank, an Australian startup, plans to use blockchain-based systems to affect payroll. The technology can simplify and standardize payments in different currencies, changing the way companies compensate employees. It can change how workers are saving for retirement and help companies take better care of their employees. This would all be possible through the use of smart contracts, which create enforceable and immutable rights and obligations for all participants. Immutable contracts in HR can automatically release payments once workers complete assigned tasks, which smooths income for workers and cash flow for companies.

Looking at the present market, different industries are incorporating blockchain into their business, meaning more technology experts and people with knowledge about blockchain will be needed. Human Resources will be vital in the blockchain space because the massive amount of jobs getting added into the field means more talent looking for this line of work. The increase in criteria for an ideal job candidate will call for applicants who have knowledge of blockchain and those who have worked with the technology.

Grab the blockchain education you need

What skills are needed?
The Human Resources department will manage the process of recruiting all positions through the sourcing, screening, scheduling, interviewing, and offer stages. Being organized and effectively communicating with different internal teams in order to understand where blockchain technology has progressed is vital to working in this industry. In regards to the business side, expressing a company’s goals, values, and current projects to interviewees is also a necessary tool for an HR worker. Being organized, great at managing time, handling multitasking, and the ability to work closely with hiring managers during these processes are additional traits that benefit anyone interested in HR.
What experience is needed?
For those looking to get into the field of Human Resources, a few of the achievements needed would be a minimum bachelor’s degree most likely in a Human Resources major. Company specific: maybe graduate or higher degree, having proficient knowledge of new cutting-edge recruiting techniques. In addition, any previous recruiting experience especially within technology companies will stand out and a proven track of previous human resource job(s) will certainly help one’s case.
What companies are hiring?
Human Resources as of now seems like a job that pertains to smaller and startup companies that are hiring. Companies like PrinterPix, DRW, Chainlink, BlockFi, Binance, Paxos are all looking for Human Resources positions.
How do I get into the blockchain space?
Those wanting to get into Human Resources jobs in blockchain should look on popular job sites like LinkedIn, AngelList, etc. Information and readings about blockchain on sites like Cointelegraph and CoinDesk will help you learn about worldwide up-to-date information and news on the technology. BlockchainDriven has a weekly newsletter overviewing specific stories in the blockchain space. If there is another career role that interests or fits more qualifications, BlockchainDriven Academy has several other guides with careers and job insights for positions that might help readers get into the blockchain space. Furthermore, the BlockchainDriven newsletters contains a career section to lead readers to job postings.

No subscriptions have been created yet.